Welcome to 30 Adoption Portraits in 30 Days, hosted by Portrait of an Adoption. This series will feature guest posts by people with widely varying adoption experiences and perspectives.

Being Biologically Related Was Like a Super Power
By Paige Strickland

I’ve been an adoptee for fifty-eight years and an adoptee-in-reunion for thirty-one years. The journey never ends, and I’m okay with that.

I never knew a day when I did not know that I was adopted. In fact, knowing I am adopted and what adoption fully means was a fuzzy blurred line for many years. When I did figure it out (or just enough of what adoption meant), I was about five or six.

I understood that I did NOT come out of my mom’s belly, (the mom who raised me, therefore she is “Mom”). I came out of some other lady’s belly. She was some other mother-not-mother to me, and in my mind, I thought of her as “The Lady Who Had Me.” She was mysterious, elusive, faceless — but out there somewhere.

(At the innocent age of five or six, I still had no idea there had to be a father-not-father as well).

Having so many secrets about my biological past was frustrating. It made me feel embarrassed and ashamed because I had a different birth story from everyone else. I did not like being different and I stuffed my secret past down deep in a secret place in my heart and tried to forget about adoption.

From my teenage perspective, adoption was a veil that split me from everyone else. It made me terrified to date boys because of what could happen.

I made the most of life regardless by embracing my adoptive family’s ancestral story. Mom’s people were proud, staunch, resourceful German and English immigrants who started businesses and experienced the quintessential American Dream. Dad’s people were more “colorful” as Scottish-Irish plus probable but undocumented amounts of Cherokee and Ashkenazi Jew.

In school, we learned about Native Americans, (whom we simply called “Indians” at the time). I loved Paul Revere and the Raiders’ song about the Indian Reservation. I did not understand the point of the lyrics, but I loved the part that went, “Cherokee People! Cherokee Tribe!” That was me at age five.

I wanted to be a Cherokee Indian, and if I wished it hard enough, maybe I could actually turn my DNA into that. (Although, at the time, I knew nothing about DNA; I only believed that super-wishful thinking could perhaps change who I was and make me more like my adoptive family). What I really wanted was to belong with people biologically and not just legally.

A car or a house is property that legally belongs to someone, but I wanted a biological way to connect with people. Everyone else I knew had that ability. Being biologically related was like a super power. It was up there with flying, spinning webs, ESP and super speed.

I have it all, so when I say I am a “grateful adoptee,” this is what I mean. I can never get back missing time and connections, but I love my life now in many ways.

Last January I was checking in on my Ancestry.com DNA page. (Nope, no Cherokee in my heritage).

I found a new first cousin. He is another adoptee. My birth father and his older brother had something in common besides just being brothers in the US Navy. They were both birth fathers.

I had the chance and blessing of helping my new fellow adoptee cousin come closer to a sense of belonging. We have emailed, messaged on social media and even called one another off and on all year. I have sent him photos of my late birth father and birth uncle (my cousin’s biological dad).

Like me, he had a good childhood and upbringing, but he always had questions and a need to fill in the gaps his whole life.  I am fortunate to have been able to serve as his contact person. It gives us a unique bond.

Adoption means that as adoptees, we are in an unconventional but amazing position relationship-wise in that we can be the bridge for others who “get it” (fellow adoptees) and those who have had genetic and ancestral privilege all along. We can teach and show the way.

We are ambassadors. We may have more power and influence than we sometimes think we have. We are strong people. We are our own tribe. We are Adoptee-Strong! 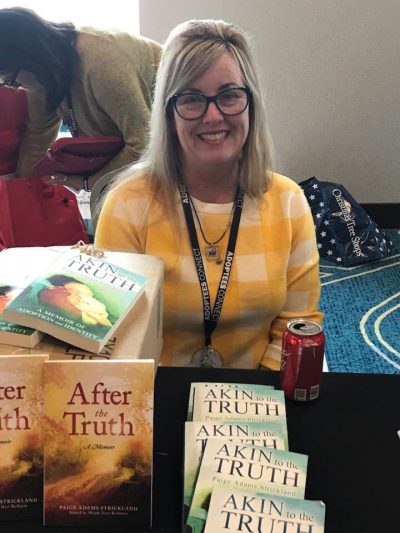 Bio:
Paige Strickland is the author of two adoption memoirs, Akin to the Truth and After the Truth. She is an adoptee-in-reunion from Cincinnati, Ohio. She teaches and tutors during the day and spends lots of time with her kids and grandchildren in her free time.