Mom and I Could Talk About Everything Except Adoption 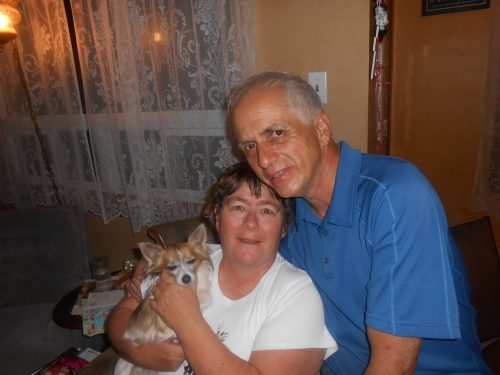 Welcome to 30 Adoption Portraits in 30 Days, hosted by Portrait of an Adoption. This series will feature guest posts by people with widely varying adoption experiences.

I was born on February 20, 1959 at Oshawa General Hospital. The events in the early days of my life were filled with a lot of upheaval.

My mother and father already had a year-old boy, and my parents were not married. In the 1950’s, this was frowned on. And to add to this shame, my mother’s first marriage had ended.

There were other obstacles leading up to my birth. My father’s job was not steady, and my parents struggled financially. My mother’s nerves were shaky, and there was the stress of another child coming into the world.

My mother wanted to make sure that I had a good home so she could watch me from a distance and see that I was getting good care. A decision was made that my grandfather would adopt me. At the last minute, my grandfather changed his mind.

I made my entrance into the world on February 20, 1959 at 1:40 p.m. I needed a home, and it broke my father’s heart to let go of his baby girl. My father turned to his brother and his wife and asked if they would consider taking me. Later on, my mom revealed to me how distraught my father was in finding me a new home.

So for a couple of days, there was uncertainty as to whether I had a home to go to. After the weekend, my father’s brother, Clifford, and his wife, Hazel, made the decision to adopt me.

My grandmother and grandfather came to see me. To my sister and grandmother’s knowledge, they did not know that I had already been named. So with my new sister’s and grandma’s help, I was named Margaret Diane.

From the start, I was given this message from my mom when she tucked me into bed: “We are so glad that you are in our family. Your parents could not look after you and asked us to look after you.”

As a three-year-old, I became anxious and asked why my parents could not look after me. Mom tried to calm my fears a bit and said it was not necessary to know, not to be scared, because I was a part of their family now.

A warning came to me from Mom not to tell anyone about my parents not being able to look after me, that it was our secret.  My anxiety continued to grow inside of me.

Mom and Dad were on pins and needles wondering if my parents would want me back. At age three, my adoption became final.

Not long after that, Mom and Dad and my older sister went to the fair in Toronto without me. During the overnight trip, I went to stay with my dad’s sister. I did not know her very well. My cousin came to play with me, but I did not want any part of playing with my cousin.  I was put out that Mom and Dad had left me. I was not amused. I cried and cried and there was no way anyone could coax me to settle in with my aunt.

My grandparents came to pick me up to go their home after they had been at the market. I relaxed and went home with them. I knew my grandparents a bit better than my dad’s sister.

When my parents came back, I clung to Mom, as I was afraid I was going to be left behind.  For some time, I withdrew and I would not enter into activities with the other children. I went through a shy stage for quite a while.

The fear of being left began to build up inside of me in unknown situations. I shed a lot of tears at school and at church. Other children teased me and called me a crybaby.

I was haunted by Mom’s warning, “Don’t tell anyone about your parents not being able to look after you. It is our secret.” An ache to know my birth parents tormented me inside.

A couple of times I mentioned that I was adopted to other people, and I said that I did not think I belonged in my family. One lady mentioned that I looked a lot like one of my cousins. I glanced over at my cousin, and sure enough, I could see the resemblance. Another friend explained as best she could that I belonged in my family. But I was not convinced.

When I was growing up, adoption was not spoken about. In the 1960’s, this was known as family business not to be shared outside the family.

I settled into living with my mom and dad. Family life was not perfect, but I knew that Mom and Dad loved me. We went on vacation together, and I learned to swim. We went to church as a family. I grew to love playing the piano and I loved to sing. Singing kept my stress level down.  I have many pleasant memories with my family.

School was a different matter. From the very beginning, I struggled to concentrate on my lessons and to get along with other children, because my emotional pain came out in the form of quick tears, and I was easily anxious.

I did not like myself very well. There were times that a sadness came over me, and I wanted to end my life. There were far too many times that I wanted to cut myself or to fall off my bike.  I just did know what was wrong with me.

Sadness continued to follow me after I completed high school. Self-doubt plagued me as I tried out many jobs, but I cried too easily at work, and tears were always the cause of me losing my job. I lacked confidence in myself.

In the early 1980’s, adoption was beginning to come out into the open. For the first time, Dad mentioned that adoption records needed to kept sealed for privacy. Communicating about adoption was a closed subject between my parents and me.

My dad passed away in 1987, leaving just my mom, my sister and me. I hoped for a renewed relationship with mom – one that there would allow an open dialogue on all topics, including adoption.

I met Maurice and we courted for two years. A year later, we were engaged and our relationship blossomed. Maurice filled in the loss I was experiencing after Dad’s passing.

A month before Maurice and I were married, I came across my adoption papers in the bank vault, among my savings bonds, my mom’s will, and other legal documents.

I discovered in a long white envelope that my birth name was Linda Marie with a surname different to mine. Mom explained to me, “This was what your mother named you.” As I was about to ask more questions, Mom interjected with, “I am not at liberty to tell you who your parents were.”

A month before my wedding was not the time to ask mom any further questions. I did tell a friend a couple of weeks after the wedding about the disturbing chat with Mom and how she would not tell me about my beginnings.

For the first time, I learned that you could apply for non-identifying adoption information. I sent away for the forms, filled them in, and waited. I also asked the local Children’s Aid near where I grew up in Port Hope for information.

Two years later, I received a large envelope through registered mail. The information confirmed my birth name and that my adoption was a private adoption.

I contacted the Children’s Aid office in Cobourg, and the lady who answered the phone suggested I attempt to open the subject about my birth parents with my mom again. The worker explained to me that finding your birth parents could take years, and maybe talking with Mom would save me having to wait so long.

Mom and I could talk about EVERYTHING except the topic of adoption. I knew that this would not be an easy task.

A couple weeks later, with much thought and prayer, I put my plan into place to ask mom on my wedding anniversary. My plan was to pull out the family album and reminisce about family life. Everything went well as we were looking at the album, up until I asked about my adoption. When I asked how I came to be with my parents, communication began to break down. Mom tensed up and closed the subject abruptly.

This did not go over well. I had made up my mind that I was not going to be shut down. Confidence built inside of me as I pursued my quest for answers.  Mom continued to shut me down by deciding it was bedtime.  But I persisted in asking questions. Everything came to a head when Mom announced that my sister knew the details, and I could ask my sister after Mom passed away.

Pent up rage emerged from me. Everything I had ever thought about being adopted came out. “It is not fair that you can tell my sister and not me. How come she gets to know about my beginnings? You like my sister better than me. Why can you not be open and honest with me, yet you told my sister?”

Silence hovered our house like a black cloud. I waited to hear from my mom. Mom appeared at the living room door entrance, and she finally revealed the identity of my birth parents – they were my aunt and uncle. After so many years, I knew the answer to my questions of who my parents were. Two days later, I celebrated Christmas with my mom and my birth parents.

I realized for the first time that I DID belong in my family. My family history had been switched. Instead of growing up with my parents, I had grown up with my aunt and uncle.

I knew who I looked like. I knew why I had big feet. I knew where I got my sense of humor from and who I laughed like.

My reunion with my mom, aunt and uncle was not a good one. My aunt and uncle were filled with guilt and shame, and it was not easy for us to maintain a reunion. But I had known my aunt and uncle all my life and interacted with them on holidays and family gatherings.

It hurts that my birth parents married eighteen months after they gave me up, and they kept my brother. Later on, my mother had a baby, so I have a sister who is ten years younger than I am.

The details of my beginnings remained a secret from my birth siblings.  I recently disclosed my identity to my one sibling. The news slipped out by another relative about me.

I have come out to share my truth. I have shared my secret and the truth has set me free.

Margaret lives in Kitchener, Ontario Canada. She has been married for 26 years. She likes to bike, swim lanes, and do Aqua Cycle.  She is in contact with her aunt at Christmas and on Mother’s Day, but her birth father has passed away. She enjoys creative writing and has self published her journey. She and her husband have a dog named Pedro.