But Then We Fell In Love With This Kid 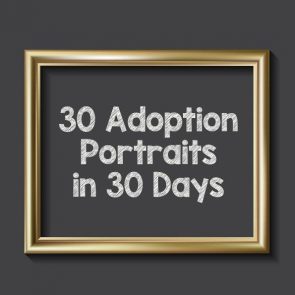 In honor of November being National Adoption Awareness Month, Portrait of an Adoption is hosting the fourth annual acclaimed series, 30 Adoption Portraits in 30 Days. Designed to give a voice to the many different perspectives of adoption, this series will feature guest posts by people with widely varying experiences.

Sunday, May 11th, 2014. Mother’s Day. I awoke to the sound of my phone chiming, alerting me to an incoming text message. I put on my glasses and glanced at the screen. Three words: “Happy Mother’s Day.”

It was the first “Happy Mother’s Day” I would hear that day – before even my husband or children had the chance to say it to me. Those three little words seem so common, so mundane. And yet, they were profound. Not in the sappy “I love motherhood and I’ve been so blessed” kind of way. Truly. Profound.

The text was from my soon-to-be-adopted son’s biological grandmother.

Eleven months prior to Mother’s Day, I was walking out of the gym with my kids, when my foster care agency called to ask if I could take a little boy named J. My husband and I had decided that past weekend to take a break from fostering, but I hadn’t yet called our agency to let them know. Of course, that’s when we would get a call about another placement!

Through a series of back and forth phone calls between the agency and me, and my husband and me, we agreed to take J for a short-term 10-day stay, until other arrangements could be made.

A few hours later, a timid and scared little brown-haired, brown-eyed boy was standing in my foyer clutching a Garfield stuffed animal – no doubt a gift from the shelter where he had spent the previous night. J came with one extra set of clothes in a plastic shopping bag. I invited him to take a seat in the dining room, where I had a plate of fresh-baked cookies waiting for him. While he was momentarily occupied, I used the opportunity to review paperwork with the caseworker that had dropped him off.

“So I assume his case goal is to return home, correct?” I asked.

To my surprise she said ,”No, his goal is permanent guardianship. He won’t be returning home to his biological parents.”

And then she asked me, of the child I had only met thirty seconds ago, “Are you interested in guardianship?” Guardianship, to explain briefly, is very similar to adoption. It means we’d become the parents and legal guardians fully responsible for this child until he turned eighteen years old.

I was blindsided. “Umm, no.” I fumbled. “We’re only doing foster care. But he can stay here until you find someone else.”

J was scared and silent until dinner. And then he realized that by burping, he could make my other two kids laugh. So we spent the next week with him burping and giggling his way through every meal. Nights were the hardest. He wasn’t used to sleeping alone, and in our house, he had his own bedroom. He cried himself to sleep the first four or five nights. Sometimes I held him while he cried, but other times, that attempt at closeness just seemed to scare him even more.

The day after J moved in, his CASA worker (a volunteer children’s advocate) came to visit him in our home. The CASA also asked me if we were willing to take permanent guardianship. Again, I said no. But I felt guilty. I explained that my husband and I had a long-term plan for our family. We intended to spend a few years fostering while our children were still young, and then we wanted to travel the world as a small family.

But then we fell in love with this kid. It didn’t take long before we were head-over-heels. We spent our evenings discussing our long-term plans — the extra expense of a third child; the added stress when traveling; another college tuition. But every time, our conversation eventually circled around to the general philosophy of “what’s one more child?”

I’m actually a little embarrassed now at our need to talk ourselves into making J a permanent member of our family. In reality, the delay wasn’t due to him – he was perfect and we loved him – it was about us. We simply needed some time to wrap our heads around the idea of the future of our lives changing from what we had envisioned.

By the end of the first week, I was on the phone to the caseworker telling her we had changed our minds. I silently prayed she hadn’t found another family for him yet, and I was relieved when she said they hadn’t. And so just like that, his ten-day stay became permanent.

The next month, I went to court for his case. Two shocking things happened that day: First, the judge changed the goal from guardianship to foster adoption. Adoption affords a few more securities and pleasantries (like changing his last name to ours), so that was very exciting. Second, the judge ordered the foster agency to look into moving J to the home of his biological grandparents. My heart sank.

The following month was stressful, to say the least. We wanted to begin immediately bringing J into the fold of our family. We wanted to assure him that we’d be there for him, forever and ever. We wanted to invite him to call us mom and dad.

But we also knew he could be moved to his grandparents’ house at any moment. In the end, the legal decision was made to keep J at our home, in our family. My husband and I were relieved and elated. J felt like our son. It just felt like he belonged with us.

But somewhere else, a few states away, a couple was mourning the loss of their grandson, a child whom they’d taken home from the hospital and raised as their own for his first eighteen months. They loved and cared for J as much as any parent or grandparent would. I believe that one of the biggest reasons J is as emotionally and physically healthy as he is, despite the turmoil in his short life, is due to the stable and loving beginning he received at his grandparents’ home.

J’s grandmother and I started calling and texting each other. She sent me J’s baby pictures. I sent her recent pictures of our family and of J playing on the beach with my other children.

And on Mother’s Day, J’s grandmother was the first person to wish me well. Three little words, profound given the circumstances.

Here is a woman who would be well within her rights to dislike me. She raised my baby for his first eighteen months. When she was ready and willing to take him back into her home, she was told by the powers that be that I – a stranger – would be adopting this child instead of her. By all accounts, this woman and I should be enemies.

But instead, we set aside our differences for the sake of the little boy we both have in common.

This month we finalized our adoption of J. We had a big party to celebrate, and J’s birth grandparents, “Nana and Papa,” were here for it. They brought gifts for all of our kids, graciously met our extended family, and spent hours playing baseball in the yard with J.

That’s the power of motherhood – the power to love so fiercely that you transcend all fear and anger. It’s a power that I’m honored to share with J’s Nana. To be sure, foster care and adoption are not always easy. It isn’t all sunshine and roses. But it was worth it. And I am forever grateful for the beautiful and mysterious web of love that foster care and adoption has brought into my life.

Jasmine Schmidt has been a parent for five years and a foster parent for two years, to a combined total of nine children. She writes about her life at ChicagoNow.com/That-Foster-Family and answers common questions about foster parenting at FosterCareQandA.com.

This year’s Adoption Portraits series is filled.  You may send a submission for next year’s series to Carrie Goldman at portraitofanadoption@gmail.com.  Follow Portrait of an Adoption on Twitter and Facebook.

Check out Carrie Goldman’s award-winning book Bullied: What Every Parent, Teacher, and Kid Needs to Know About Ending the Cycle of Fear.